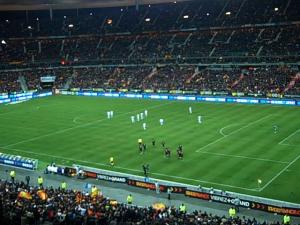 I’m not usually a fan of le football. It’s long and slow and unless David Beckham is running around naked, I could care less. Actually, unless David Beckham and Thierry Henry and that Brazilian Portuguese guy who carries a man purse are sitting naked with me on the sofa, I would usually rather poke my eyeballs out than watch professional soccer.

That’s not a personal attack on FIFA. It’s just that I find it hard to sit around for 90-plus minutes waiting for maybe one goal. And since I spent my brief soccer career picking buttercups and practicing cartwheels, I have little to no appreciation for the intricate footwork that’s going on in between all that not scoring.

Yet somehow I married a man who loves soccer with all of his body and soul. A man who regularly says things like, “I can’t wait to rip our future children from the womb and sell them directly into the Real Madrid farm system!”

So for his birthday I bought us a pair of tickets to the pre-World Cup friendly match between France and Spain. Yes, these are the things we do to score mad points as a wife. Besides, soccer games in Europe have a reputation for getting a little nuts, so I at least expected a cultural spectacle. Oh yeah, I can get on board with rowdy fans and flag waving and chanting and of course, beer! They would be drinking beer right? Or maybe sloshing around glasses of red wine with a side of foie gras nachos? If I was really lucky, maybe I’d get to hear the announcers shout GOOOOOOOOOAAAAAAAAAALLLLLLL! And then I could sit back and let my eyes glaze over in front of the jumbo-tron. I’d be totally fine.

Well, the trip to Stade de France was promising. There was singing on the train, face paint galore, even some potential fighting. Awesome!!! Allez Bleus! But once we got inside, and realized I had bought two seats that were not next to each other, things were a little less awesome. I got the impression that the French guy next to me wasn’t really interested in my witty American commentary. And where was the beer? Or the nachos? Or the bleu cheese truffled pretzels or whatever it is they eat at sporting events here?

Not to mention the extreme lack of jumbo-tron entertainment. What, no Kiss Cam? No sound system blaring da da de dadadada – ya’ll ready fo this! 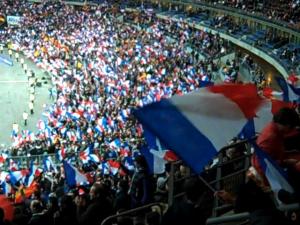 Nope. The French fans were too busy dutifully waving their French flags and intently watching the game to need concessions or fist fights or even people shooting t-shirts with a giant sling shot.

Save for a few wily Spaniards, the crowd was incredibly well behaved and oddly focused on the match below. So out of desperation, I spent a good hour just wondering when American sports took such a drastic turn toward obnoxious mid game diversions. Are we so lazy and short of attention that the game we just dropped mucho bucks to see isn’t even enough entertainment?

Well if you’re asking me and I’m at a soccer match, then yes. But I’d assume real fans would much prefer this pared down, purist approach. That’s why people love Fenway, right? It’s old and decidedly less flashy, but who needs a gimmick when Jacoby Ellsbury is right there, diving to catch a fly ball? In those tight baseball pants? And for a second you make eye contact and the world stops spinning on it’s axis?