Right after Christmas we packed up the babe and flew to Lawton, Oklahoma.

What’s that you say? You’ve never heard of Lawton? Never been to Oklahoma? Well, me neither. And before my visit, my knowledge of that midwestern state was pretty much limited to a hazy notion of dust bowls and the Trail of Tears. Not exactly the stuff of dream vacations.

Granted, my trip was made exceptionally fun because of one awesome niece and some wonderful in-laws waiting in Lawton for us. But I swear, there are some really cool things going on in Lawton other than my extended family. Such as the Fort Sill artillery museum. Also known as the weirdest place I’ve ever whipped out a boob to feed my child. 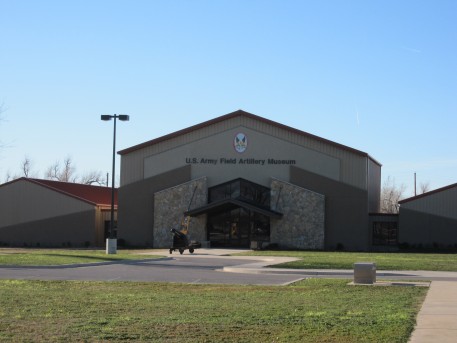 Best exhibit: A stuffed mule that was similar to the mule used in the doomed-from-the-start Mule Cannon experiment. I am not kidding.

After the museum we drove around the historic grounds of the base and saw Geronimo’s prison cell, followed by his final resting place. The next day we had some excellent Tex-Mex food and played a little four-square in the golden prairie sunlight. But the highlight of the trip came on our last day, when we drove out to Meers for a world famous Meersburger.

The Meers Store is a ramshackle looking little place at a crossroads out in the middle of nowhere, next to a big wildlife refuge complete with roaming buffalo herds. They have world famous burgers, made from their own herd of Texas Longhorn cattle, which roam with the buffalo next door.

When we arrived around 2 in the afternoon on a Friday, the line was out the door. But that’s ok, because it gave us plenty of time to read all the old license plates and bumper stickers on the walls.

I could tell that these people had a sense of humor, which upped the odds that this was going to be one helluva burger.  As we inched closer to an open table, my in-laws briefed me on proper Meersburger etiquette:  Don’t ask for any substitutions or fancy additions, unless you want to be called a “sissy.” Don’t expect anything to drink other than beer in a giant mug or RC Cola in a giant Mason jar. And be prepared for a burger the size of a pie plate, designed to keep hungry cowboys full all day.

I know what you’re thinking: That burger is insane! And: They still make RC Cola? To which I say: yes and YES! Don’t sleep on the RC Cola! It’s delicious.

But back to the burger. It was awesome. Ginormously awesome. I was slightly alarmed at the thinness and well-doneness when it arrived, but let me tell you – it was still fabulously juicy and full of flavor, topped with the Meers-standard pickles, mustard, onions, lettuce and tomato.

It was indeed enough to keep several hungry cowboys full all day. But that didn’t stop us from ordering peach cobbler with homemade vanilla ice cream. It was a thing of beauty. I didn’t get a picture of it because I was in a food coma at that point.

After the Meers experience we drove up into the Wichita mountains to scramble over the rocks and watch the sun set over the wildlife refuge, one of the few places left with real bonafide prairie grasslands. The light washed over the orangey stone and muted greens, giving everything a rosy golden glow. It was lovely.

Lovely! Did you hear that? Oklahoma was actually lovely! I had a great time there. And hearing anyone say otherwise? Well, it really…

It took 3 years but I’m finally a pistacchio gelato fan. Pair it with dark chocolate and it’s like a gourmet peanut butter cup! @nevedilattegelateria