I hope you all ate enough dinde for your turkey-less compatriots here in Paris. Because while we did have the day off, I was too busy exploring, enjoying and uncovering new things to wrap my head around the logistics of trying to squeeze a bird into my tiny godforsaken oven. Here’s what I discovered over the past week:

1. Babies don’t like Diane Arbus.  Last Tuesday I met a friend at the Jeu de Paume for the Diane Arbus retrospective. It was my first visit to the museum, and my first in-depth exposure to Arbus, so I was excited. But 5 minutes and 3 creepy midget photos into the exhibition, le bébé started wailing. We made a swift exit and sat in the Jardin de Tuileries for a while instead.

2. Parisian pumpkins are not all the same.  In my quest to make pumpkin pie, I roasted up no less than 3 different kinds of squash and 2 sweet potatoes on Wednesday. What I learned: Potiron, which looks like a big cartoon Cinderella pumpkin and is sold by the slice at the market, is no good for pies. Too watery and stringy. Potimarron, however, elevates our Thanksgiving classic to new levels of deliciousness. Those bright orange, turban-shaped gourds have a rich pumpkin-like flesh that tastes like chestnuts. Even when my stupid oven didn’t cook it at the right temperature, my pie turned out awesome. We may or may not have already eaten the whole thing. At breakfast.

3. Babies do like king size hotel beds.  On Friday we made a brave, brave decision to hop a train to Lyon with a 4 month old in tow. A 4 month old with a habit of waking up at all hours of the night and flexing her newfound vocal cords. But miracle of miracles, le bébé was a total dreamboat on the train ride, a sweet cherub during all our restaurant meals and walks around town, and absolutely the most happy child I have ever seen when we let her flop around on the cushy hotel bed. So apparently she likes nice hotels as much as I do.

Lyon is known for it’s fabulous food, being the hometown of renowned chef Paul Bocuse and all. Enjoying that food was somewhat difficult with an infant on board, especially since the only time she seems to sleep without complaint is between 6:30 and midnight. Kinda wipes out the dinner hour.

But we did manage to check out some amazing markets and sample some delicious piggy parts– le cochon is a Lyonnais favorite. 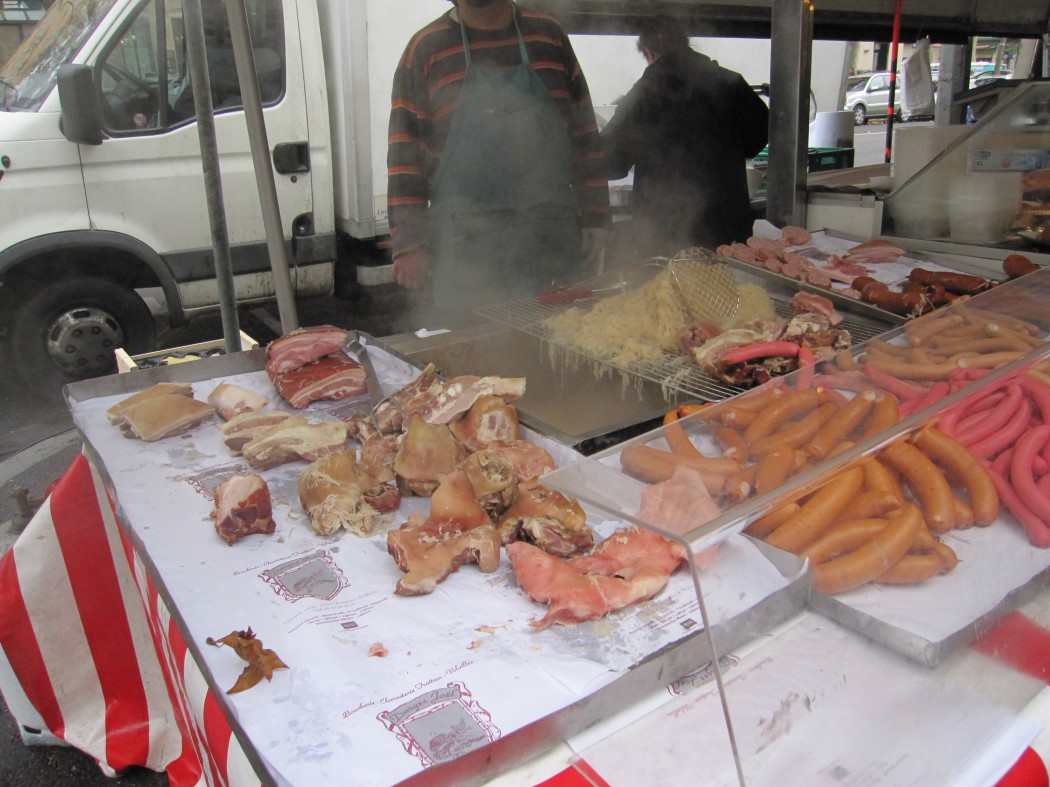 And as a parting gift, Husband took us over to Les Halles (the city’s famous indoor market) for one of the best breakfasts I’ve ever had. Oysters and a glass of white wine on an empty stomach…not for the meek, my friends.

Couldn’t finish this one. Very disappointed in myself. I can do better @giolittiofficial 😞 (cinnamon & cioccolato fondente) #gelatodiaries